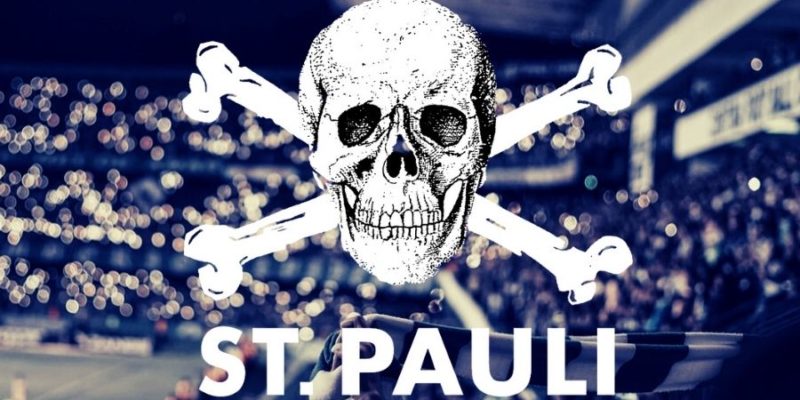 St Pauli is the punkest football club on the planet. The German second division team fight for what’s right, both on and off the pitch. Whilst European football ultras often have troubling links with far-right ideology, Hamburg club St Pauli, since being founded in 1910, has evolved into being the stereotype’s antithesis.

For the first 70-years of the club’s existence, there wasn’t that much that made St Pauli stand out from the pack. They were just a run-of-the-mill small German club that had bounced back from the brink of bankruptcy and managed to reclaim their place in the second division in 1984. Around this time, the identity of the club would change and represent a new facet of Hamburg.

The club started to transform into this unstoppable Kult in the 1980s, a period which ultimately derives from their stadia and the growth of the area in which it is situated. The team play their games at Millerntor-Stadion, situated close to the working-class docklands and just a short distance from Hamburg’s famous Reeperbahn and red-light district.

They quickly started to grow a fanbase built upon a love of left-wing politics and hope for a fairer future. The club became the first German team to officially ban any fans who had links to right-wing nationalist politics. This poignant message helped spread St Pauli worldwide, with fans internationally adopting them as their German team.

The move to distance themselves from traditional football fandom made a fundamental change to the stagnant system. Those who have, at some time or another, wished to attend a football match but lacked the confidence began frequenting the games of St Pauli. It also meant, of course, that wherever St Pauli travelled, far-right ultras and physical violence was never far away in opposition.

“St Pauli is unlike any other club,” Tim McIlrath, frontman of American punk band Rise Against, told The Guardian in 2018. “We went to their stadium, and to see ‘No Football for Fascists’ painted across the stand, to see them encouraging more girls playing football – it’s fascinating. I was looking for a club that transcends sport – St Pauli is a model of that.”

McIlrath added: “Especially to spread antifascist and antiracist views in a society in which the important and real things are brought out of focus. Sport can provide sanctuary to a lot of right-wing motivations and hooliganism – FCSP taking a proactive stand against that is exciting.”

Gaslight Anthem’s Alex Rosamilia is another figure within the music who has adopted the German club. During every performance by the band, he would droop a St Pauli flag over his amp. “They were one of the first clubs to not allow racists in, and they’ve been pretty left [wing], and punk rock,” the guitarist once said.

Whilst punk was the brand of music that was intrinsically linked with St Pauli, as times and culture have changed, techno is now the beat they find themselves dancing to in Hamburg. There are several similarities between the two scenes, even if the music couldn’t be more different.

Both the punk and techno scenes were forged on a feeling of togetherness. Attending punk gigs or raves are more than just a standard show, it was about being part of something bigger. They become communal places of worship full of like-minded individuals escaping from the monotony of everyday life — an emotion that has often been used to describe the world of live football.

St Pauli, despite being a mediocre second division side, have somehow one of the highest merchandise revenues in the whole of German football, and it’s become common for people from all over the world to come for a footballing holiday in Hamburg. The nightlife of the Reeperbahn and it’s thriving techno scene make it an even more enticing place to visit as well as a weekend never to forget.

Their matches are comparable to the atmosphere created at a concert or a rave, no matter what the score is, it feels like a carnival within the Millerntor-Stadion. Twenty-nine thousand fans pack out the stadium every week, and the only thing on their mind was to make sure that the pilsner keeps flowing and everybody is having a joyous time before hitting the Reeperbahn.

Diego Maradona once threatened to have Oasis shot

From Daft Punk to Eminem: Inside Wayne Rooney’s pre-match playlist